The forecast rain didn’t materialise at the Beto Carrero track today, but it didn’t make it any easier as the ruts became very deep and caught a number of riders out during the qualifying race.

One of those to fall victim to the steep drop-offs of the track was Max Nagl as he got pushed wide and took a fall. Recovering strongly though, the German who lies second in the World Championship on his CRF450RW rode through the field from 16th to finish 8th.

Evgeny Bobryshev rode for the first time since the MXGP of Thailand three weeks ago, just two weeks after an operation that saw a plate inserted into his ankle after it was discovered an old injury had opened itself up again.

For Bobby, today was about getting back on the bike and finding the limit of his ankle, but doing so gently so as not to overstretch it and risk further damage. Nevertheless, he fought well in the pack and wasn’t shy in the first corner scramble to finish 9th overall.

Tomorrow’s opening race will be held at 13:10hrs local time, and everybody will be watching the weather to see if Beto Carrero has a thunderstorm to offer.

"The track I really like, it’s really cool and with many spectators, but it’s like a mud race with so much water added to the dirt so the track is basically just one line and difficult to pass. Between the free practice and qualifying we made some changes to the bike which made it much better, and it felt really aggressive. I had a really bad gate jump in the race; it was really slow, which meant I had to go through the field. This feeling I have right now with the starts, I’ve never had before and it’s difficult to explain, but we have to work on it. It was going good working through the field after that though and I made many positions, but I got pushed wide off the edge of the track and crashed. It was a high berm so the rear wheel dropped off it and I had sort of a high-side crash. I’m ok though. Overall riding was going good today and I’m happy that we came back from 16th to 8th.”

“The track was really gnarly today with deep ruts so it was not so easy. When you make a bad start it’s difficult to come through because there’s not so many lines. I was spinning a little from the start so I lost some meters, but I had a good first corner so was ok. I was stiff on the bike today because of no riding for three weeks since Thailand, and because of my ankle I couldn’t relax on the bike. I’m still trying to find the limit with my ankle and a couple of times I twisted it which was a lot of pain. I think I’m close to the current limit, but it’s too slow. It’s only 15 days since I had the surgery though, and the doctors said full healing time is six weeks so it’s still very swollen. I had to modify my boot today to fit properly. Every time I’m landing or turning hard in corners I get a big sensation of pain. If you can’t get through the pain it’s impossible to ride properly, and it’s possible you make it worse, and to be honest my main concern is not doing more damage. But I was always sure that I will race this weekend so I’m riding safely to collect some points and I know that all the time my ankle is getting stronger again.”

“There were a lot of mistakes during that race, and unfortunately Max was just getting pushed about a bit and dropped his rear wheel over the edge of a berm. At the start he missed the gate jump a bit so then he was right in the mix for the whole race, having to take what was thrown at him. Bobby continues to recover and you could see he was suffering again round right-handers. He said a couple of times he hyper-extended it which is going to make it stiff. Really, 8th and 9th isn’t bad for tomorrow. Gate position doesn’t make a huge difference, but there is a dry line off the start from a number of gates which helps. But this raises the main unknown for tomorrow which is the weather. The track was pretty wet today even though it didn’t rain, so if the forecast thunderstorms come tomorrow it’ll be a totally different race tomorrow. It can be quite a slog when it gets really wet here because the track is ripped quite deep and if we get rain on top of that it could turn into a bit of a one-rut race.”

Qualifying Round 3   GP of Brazil Brazil 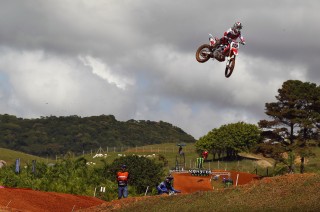 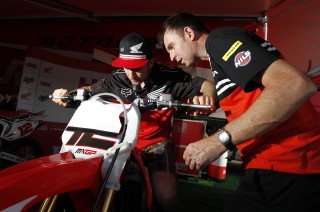 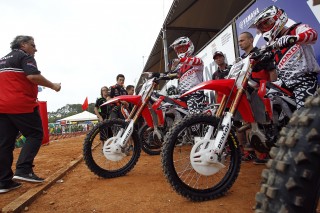 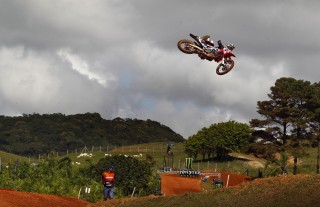