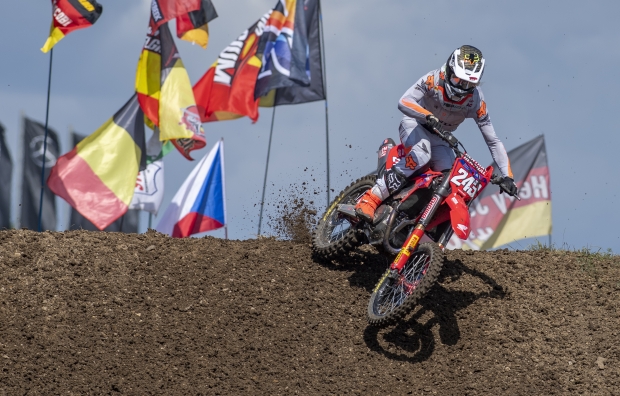 Team HRC’s Tim Gajser put in a strong qualification race at the MXGP of Germany, winning in comfortable fashion to take first gate-pick into tomorrow’s points-scoring motos. Teammate Mitch Evans backed up his fellow Honda CRF450R rider by finishing fifth in a display that had long been coming from the Australian.

Coming into Teutschenthal, both riders were confident of turning around their recent run of results and that confidence was immediately evident as they put in laptimes to give them first (Gajser) and fourth (Evans) gate-pick for the qualification race. The gap at the front wasn’t quite as dominant as his 1.7 second lead in the French timed practice last week, but this time he was able to translate the laptime, and consequential first gate-pick into a holeshot in the qualification race, from where he never looked back. Putting in laptimes over a second faster than his nearest challengers, he quickly pulled out a comfortable lead and controlled the moto until the end.

It was his first qualification race victory since round five at the MXGP of Trentino, so he was long overdue and he’ll be hoping it is a positive omen as he recorded his first one-one of the season at that round. With first gate-pick in both races tomorrow, two strong starts should also give him the platform he needs to extend his championship lead even further as the championship moves into its second half.

At one stage Team HRC riders sat one and two in timed practice and although Evans eventually ended up fourth, it was a sign of things to come because the two Honda CRF450R swept around the first turn of the qualification race in first and third position. Evans tried his hardest to get into second place early on but settled into a strong pace in third, hoping to make the most of any mistakes. As the race went on, he did drop down to fifth but he is still fully capable of getting a good jump tomorrow and that looks to be crucial as passing is at a premium at this tricky Teutschenthal circuit.

With tomorrow’s weather forecast also looking good, the track should be similar to today which the riders will first checkout in a warm-up session at 10:45. Their attention will then focus on the two motos at 14:15 and 17:10 local time where there is the real possibility of both Team HRC riders challenging for podium positions.

I had a really fun day today, just enjoying my riding and having a good feeling on my Honda CRF450R. I was fastest in timed practice so had a good gatepick for the qualification race once again and this allowed me to get a holeshot and just control the race. I really like this Teutschenthal track but I know the start is important as it was a bit one-lined today so that is the focus tomorrow, but I am super-happy just to be back to how I was feeling before Sardinia, so a big thanks to the team for all their support during this difficult period.

I have felt good for the past few races but haven’t been able to turn that into results, so it was nice to get a fifth in today’s qualification race. I put in a good lap in timed practice, ending up fourth, and I got out of the gate well in the qualifying race, sweeping around the bend in third place, almost moving into second place behind Tim. I had a good pace and stayed in third for the majority of the race, eventually crossing the line in fifth. This is how I hoped things would be going for a few weeks now, but obviously the main races are tomorrow so I’m going to be looking to replicate the starts and try to battle for the whole motos.

It was great to see Tim and Mitch cross the holeshot line in first and third place, really showing all the hard work both the riders and the team have been putting into their starts. And then to finish the race in first and fifth respectively was good for their confidence, which was already boosted after they finished first and fourth in the timed practice. Overall it was a strong day for Team HRC and we’ll be hoping to have more of the same in the points-scoring motos tomorrow.

Qualifying Round 11   MXGP of Germany Germany 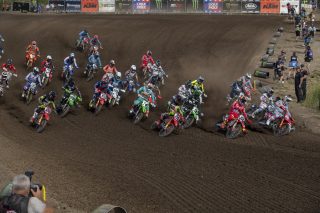 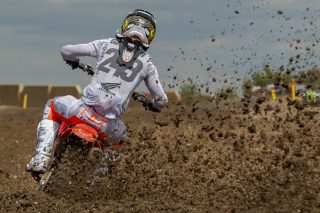 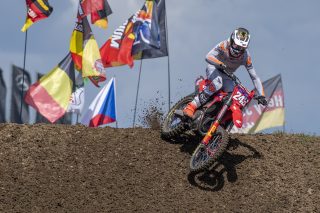 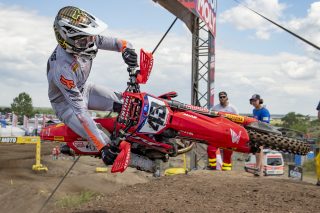 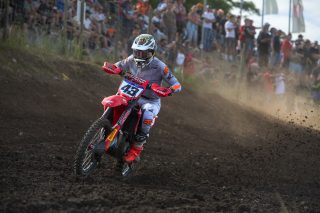 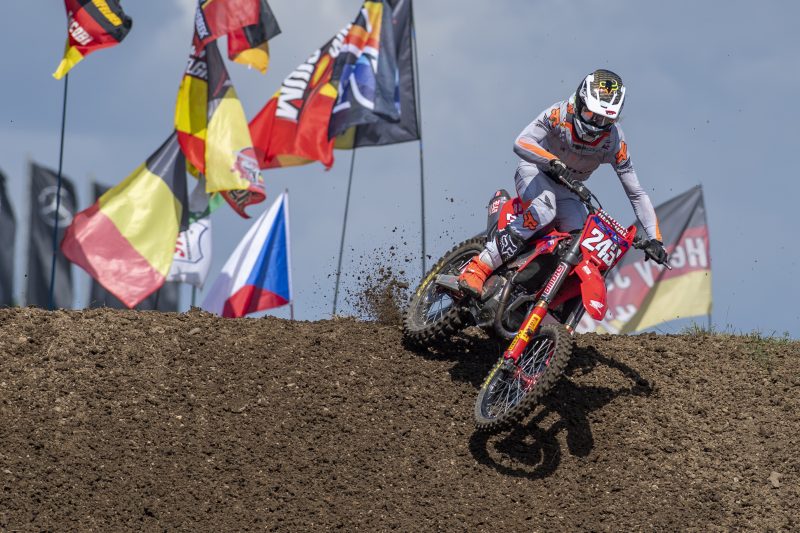