The only night race on the calendar of the FIM Motocross World Championship, the event is also significant in being the first Grand Prix for the newly renamed Team HRC, the Honda works MXGP team formally announced on 7 February 2014 as the next chapter in Honda’s increasing support of world motocross.

As was the case with last season’s opener, the inaugural Motocross GP of Qatar, racing will again take place on Saturday night under the floodlights, as opposed to the usual Sunday afternoon slot. In under a month, Losail will also play host to the opening round of the MotoGP World Championship where the factory Honda team will be flying the Honda and HRC flags as reigning World Champions.

Team HRC’s Evgeny Bobryshev ran well at the sandy Losail circuit last time around, finishing an overall fifth, although teammate Max Nagl’s illness hampered him from the start before a first lap collision restricted him to an 11th place Honda debut.

Bobryshev and Nagl have both enjoyed successful and fruitful off-season programmes with Team HRC in 2014, including extensive testing and development of the 2014 CRF450RW and fitness training at Team GB’s Olympic training base before Christmas.

After a string of podiums last year, including three from the last four rounds for Bobryshev and fourth for Nagl at the Motocross of Nations, the 2014 season is being started from a solid foundation.

See below to watch the pre-season video teaser of Team HRC:

"I really like the Qatar track and its design. The ground is good and it's a fun place to ride. I'm excited about the first race because, like the other riders, you don't really know where everyone is with performance until you get to Qatar and start the season. I'm going out a little early to do some training and get used to the hot conditions. The competition will be strong but we've had good preparation over the winter so it'll be interesting. After two months as Team HRC we have a good feeling, a lot of good support and one mission this season."

“Testing has been very good, we’ve been improving every week, so I’m really pumped for the season and looking forward to going to Qatar. Last year it was a new experience riding under the floodlights, which was a bit difficult, but the biggest problem was the food poisoning I got that really wiped me out. So this season I’ve taken steps to make sure it’s a different situation. I’m feeling good and strong, my training has been good, and the team is working well so I’m feeling positive about Qatar and looking forward to getting the season started.”

“The season kicks off early in the year again which has given us a short lead to get everything ready, especially as it’s been a busy period of intense testing and development of the CRF450RWs with the increased support of Honda and Honda Racing Corporation. At this point though you always just look forward to getting started and putting all that testing into practice. Particularly this year too, with the Qatar GP being the first race for Team HRC. Although the true test comes when the racing starts, the early signs of performance from testing have been positive, Max and Bobby are looking strong, and we’ve all gelled well as a team with the arrival of several new engineers from HRC.” 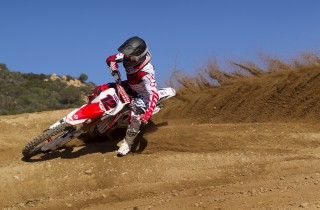