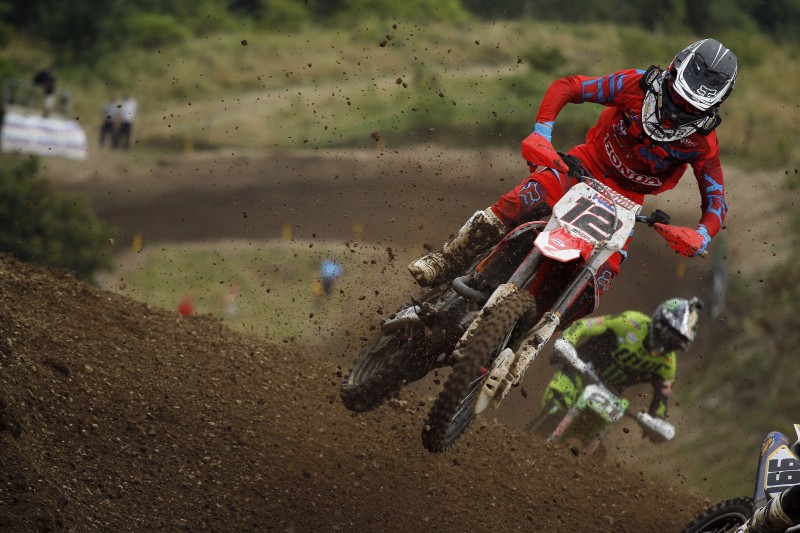 A super start saw Max Nagl head the field into the first corner in today’s qualifying race for the MXGP of Czech Republic, after which he never looked back.

The on-form Nagl muscled his way to front from the start and then proceeded to set a string of fastest laps to build a comfortable lead which he maintained until the finish, never once looking threatened.

The No.12 rider, who has taken race podium finishes from two of the last three Grands Prix since his return from injury, led every moment of the 20minute + two lap race aboard his CRF450RW in a true gate-to-flag victory. It marks his second qualifying race win of the season.

The result gives Max first gate pick for tomorrow’s two races, the first of which commences at 1415hrs local time.

The weather today was a swelteringly humid 27degrees Celsius and the track remained in good condition all day, although tomorrow thunderstorms are predicted in the region as the atmosphere reaches saturation point.

“I’m happy of course with today. I had a good start, the riding went really well because every lap I could make the gap one second bigger to Jeremy and Cairoli until I had seven seconds, and finally I could win. At the end of the race they could catch up a bit again because they were fighting and pushing really hard and I was getting a bit tired again, so I have to find good race management tomorrow. Like today, it’s important to have a good start and have good speed at the start for as long as possible. On one point I was not so happy with myself because the physical condition is still not as good as I expected but I try to ride relaxed and do the best I can for myself and for the team. The bike is working well and I’m looking forward to tomorrow. The weather is what we don’t know about – we have no idea whether it will be sunshine or big rain.”

“That was a really good qualifying race and a great start from Max. When you get Max ahead with a good start he’s very good at just getting on with it and riding away at the front, which is what we saw him do very well today. He looked really smooth, and looked like he had a little bit left in the tank when they started catching him at the end which was good to see. He’s been working really hard since Finland and I’m very, very pleased with the way he was riding and with how well the bike was working.”