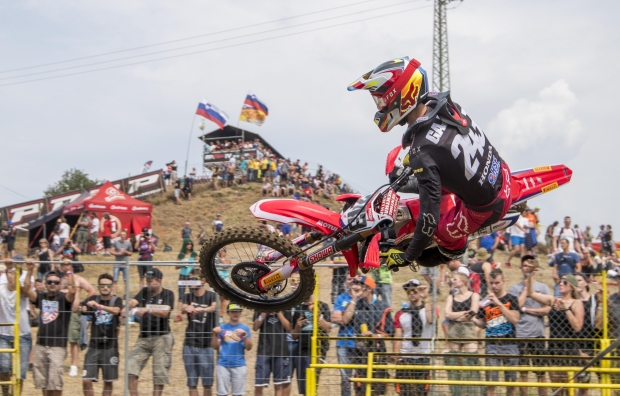 Team HRC’s Tim Gajser has claimed third place at the end of the 14-lap qualifying race for the MXGP of Czech Republic, which is currently underway at the picturesque and tricky Locket motocross track. Gajser’s team mate Todd Waters was 17th at the finishing line after starting the moto with the 21st gate pick.

Gajser reacted quickly to the gate drop and was running in third in the early stages of the encounter behind Cairoli and Anstie. As the countdown reached the three-minute mark, the young Slovenian rider moved past Max Anstie for second place, but was eventually overtaken by championship leader Jeffrey Herlings on the third-last lap. Waters maintained his position at the start and ran as high as 16th in the early part of the moto, before losing one place to Glenn Coldenhoff on lap eight. He then maintained his position up to the chequered flag.

Gajser and Waters will return to action tomorrow morning at 10:45 local time (GMT +2) for the traditional warm up session, with the two Czech races to get underway at 14:15 and 17:10.

I’m happy with my performance today. I really like this track and we were able to get a good gate-pick for tomorrow without taking too many risks. I feel really comfortable aboard my Honda, although we might need to make a couple of changes to the suspension settings as in the final laps I had a bit of pain in my arms. In any case, third place is a good result and things are looking good for tomorrow. It was nice to see so many fans from Slovenia here today, so I hope to repay them for their presence with two good races!

I had a poor start to the race, but I was able to make some passes early on and move up to 16th place, which is kind of where we stayed for the whole moto. The MXGP field in Europe is very deep, so a good start is important otherwise it’s really hard to recover. I still feel like I hit a wall in terms of performance and I still cannot make the step forward I am looking for. Surely a smoother start to this experience with Team HRC without collarbone injuries and stomach bugs would have helped, but this is where we are now and we need to make the most of every opportunity, no matter my fitness condition.

Tim did well today: he rode smart and quick, and that’s exactly what needs to be done on a Saturday. Third gate-pick is very promising for tomorrow, so we are looking forward to seeing what he’ll be capable of doing in the two motos. He really likes this track – and he’s shown that in the past already – and he’s looking good on the CRF. Todd had a little more difficult time but he put together some good moves early on and got very close to the top-15. He has the talent to do much better than this, so hopefully he’ll be able to step it up tomorrow and aim at better results. 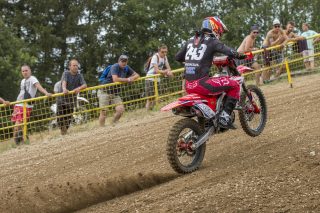