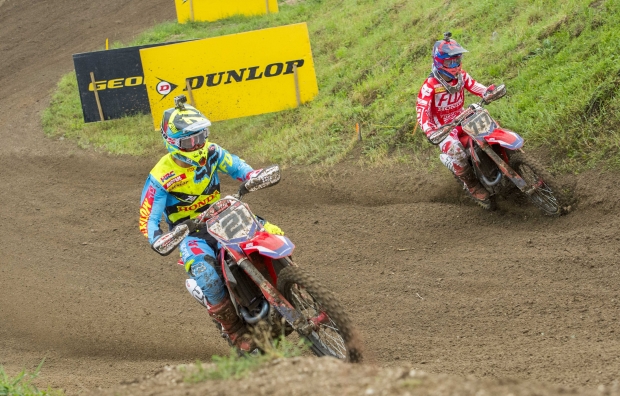 The MXGP of the Czech Republic turned out to be a tough affair for Team HRC’s Evgeny Bobryshev and Gautier Paulin, and although there were glimmers of promise and performance, the results didn’t come.

In the morning’s warm-up, Paulin came out fighting and was immediately fastest, and he translated this to the start of the first race with the holeshot and leading the opening laps. However, his race was blighted by two small crashes, and Bobby similarly suffered from ninth when he stalled and dropped him a handful of positions.

In race two, the pair were running fifth and sixth from the start and things were looking like shaping up well, but first Bobby suffered a small crash and then Gautier reported damage to his goggles which drastically reduced his visibility.

All of this was made trickier by the weather which once again was changeable and brought about rain by midday. This changed the condition of the track which was already slippery and bumpy and made it even more unforgiving.

Team HRC will get straight back to it this coming weekend when MXGP travels to Belgium and to the deep sand of Lommel for round 14, and the second of this back-to-back-to-back triple.

“The weekend wasn’t so consistent as I normally do, and I just had too many crashes. First of all I had really bad starts. In the first race I crashed from seventh place and went down to 15th and lost so much ground so it was difficult to come back. Finishing twelfth was disappointing, but then for the second race we made some adjustments which really helped me. I was riding very comfortably and was up to fifth, but unfortunately I touched the rear wheel of Gautier and crashed. I came back strong and passed five riders to seventh but I this track is not so easy and I was pushing hard so I lost some energy towards the end. I was happy with the setup and riding in the second race, but the starts were what really made my races difficult today.”

“After yesterday we made a lot of changes for today which in the warm-up were really good and I had good speed to finish fastest. In the first moto I had a good start with the holeshot, but I wasn’t feeling confident with the front end and I washed two times the front and crashed. Since a long time I haven’t had two crashes in a race so it was really bad. In the second moto we again made some changes and with another good start the feeling was good. I wasn’t fast enough for the top three, but I think my place was top five. But when Romain passed me I took a stone on my goggles and it popped all the laminate out just as it started raining. It’s so stony here there was no chance I was going to take the goggles off, so this really finished my moto. It’s not been a good weekend for me but we continue to work hard and focus now on Lommel next weekend.”

“I’d like to start by congratulating Tim today on his smart approach to what were two very difficult races. Ok he had a small crash in race two, but when coming back from that and in race one, he pushed until he absolutely found the limit attacked Max Nagl, but then decided sensibly to settle for second, maintaining his 100 per cent podium record and extending his championship lead. From a Team HRC perspective, it was a difficult weekend that was something of an uphill battle from the start, and when this track was so unforgiving, it wasn’t the weekend to be starting on the back foot.” 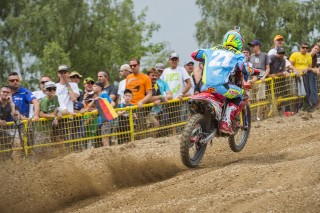 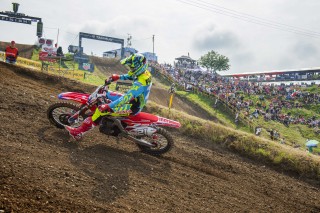 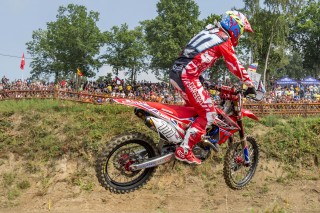 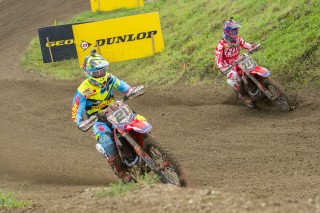 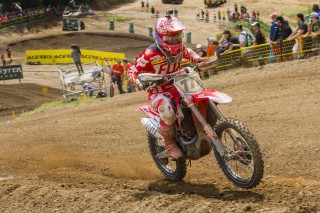