It has been a rather galling weekend in Germany for HRC MXGP but today Gajser rode a heroic race on his CRF450RW, to try to limit the damage on his world championship assault.

The repercussion of Gajser’s crash yesterday, was that he irritated the already sore bruising he sustained from his crash in the Latvian MXGP. In an attempt to ease the pain, Gajser received treatment from the HRC MXGP physiotherapist overnight and this morning and decided he would race today to retain as many points as he could. It was clear the Slovenian was suffering all day but he picked through the pack after two weak starts to take 11th overall.

We can confirm that Bobryshev had operation last night in which they plated his collarbone, we are still awaiting further news as to his return.

This has been a tough weekend. Thinking about it, it has probably been one of the toughest weekends I have ever had. I have never ridden with so much pain before. I tried to take a good start, which was not easy to do in the position I was in. Then I just tried to pass as many guys as I can to take as many points as I can. At the end of the day I am quite happy that I took 12th and 10th riding with so much pain, atleast I took some solid points. I want to be upfront so I will go home now and see my doctor and I hope I can be ready for France.

What a woeful weekend we have had here in Germany. It started yesterday with Bobby breaking his collarbone which thankfully he has now received surgery for so now he just needs to recuperate. With Tim, he fell off yesterday which didn't help from his crash in Latvia. It made him very very sore and we were actually really lucky he was able to ride today to salvage what points we could. There was no chance of fighting for a podium today and everybody in the team realised this. We have to say thanks to the team for pulling together and doing what they could but we especially have to say thanks to Tim. For him to ride through that level of pain and doing what he could was admirable. 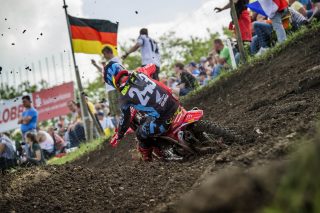 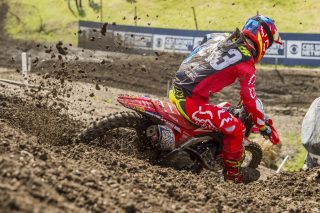