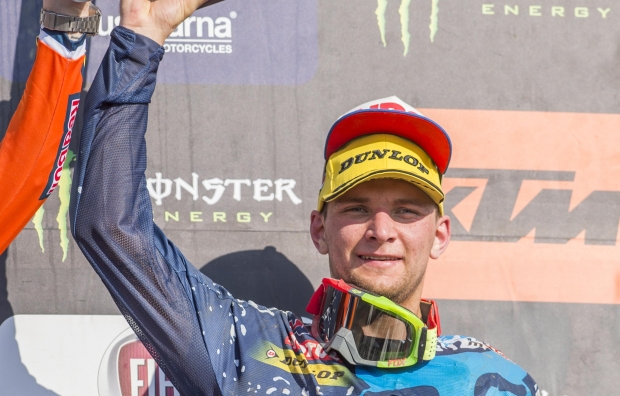 Team HRC’s Evgeny Bobryshev took his second podium of the season in Germany today with a stunning performance to take third overall, and he stood alongside fellow HRC rider Tim Gajser of the Honda Gariboldi Racing squad for the second double-HRC podium of the season.

Bobby came home eighth in race one, still nursing a shoulder that’s less than 100 per cent, but dug extraordinarily deep in race two. Starting well, he quickly found himself into second in moto two, and attacking Antonio Cairoli for the lead. Towards the end of the race a resurgent Romain Febvre was closing Bobby down, and the last four laps were intense – the duo split by less than one second.

Meanwhile, Max Nagl and Jeremy van Horebeek crashed out, and Gajser also saw himself demoted from third to ninth with a crash, meaning the overall order was changing minute-by-minute.

Coming under intense pressure, Bobby threw everything he had at maintaining second place in the closing stages, his best result of the season and his best moto finish since Mantova last year. Staying ahead of Febvre by 0.6seconds meant that he took the #777 CRF450RW to the third step of the podium, equalling the overall result from the season-opener in Qatar.

Gajser’s second place in moto one and his fight back to fourth in race two put him second on the podium, but crucially sees him retake the red plate as the leader of the World Championship after seven rounds.

The result also means that Honda lead the Manufacturers’ Championship.

“You know I was almost sick in the last few laps because I was pushing so hard and riding through so much pain. My shoulder was so tired I couldn’t hold the bike properly, but I thought ‘I just have to give this all’. At the end of the race I didn’t know I finished third overall. I’m really pumped to be on the podium. After the crash in Latvia I’ve had no time on the bike, and especially as the track here in Germany is so tough, it’s an amazing feeling to be on the podium again. I wouldn’t do this without the team and the medical centre because again they’ve done such a great job with my shoulder. And also I want to say such a big thanks to the team and I’m so pleased for this podium for them after all the work they put in. At the start of the second race I saw I was in second and I though ‘great, I’m behind Toni so I’ll see how much I can hold’, but then I could stay there. Febvre was pushing so hard behind at the end, so I’m so happy to take second in race two, and to give HRC a double podium with Tim.”

“It’s fantastic to see Bobby on the podium again, but this weekend is even better as we didn’t expect this result after his injury in Latvia, and we have the bonuses of leading the Manufacturers’ title, leading the World Championship standings with Tim, and our second double-podium of the season. Both teams, Team HRC and Honda Gariboldi, are working so hard and it shows because we can see that Honda is firmly at the front of MXGP this season.”

Race Round 7   GP of Germany Germany 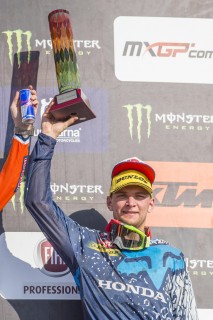 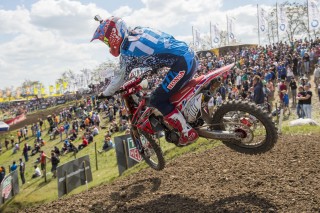 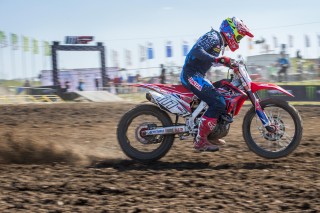 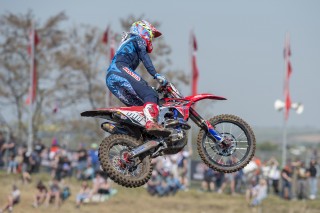