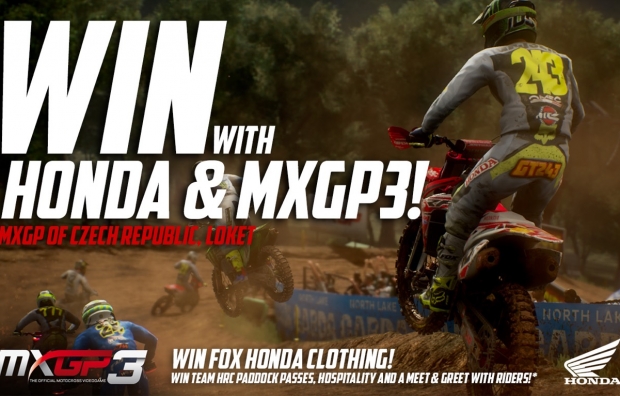 In the lead up to the MXGP of Czech Republic, held at Loket on 22-23 July, Honda and MXGP fans will be able to bag themselves some Honda Fox merchandise simply by demonstrating their gaming skills on the new MXGP3 – The Official Motocross Videogame.

On top of that, if the selected winner gets themselves to Loket, they and a guest will also be treated to a VIP weekend thanks to Honda including paddock passes, behind-the-scenes tours, hospitality and meet and greets with Tim Gajser and Evgeny Bobryshev in the ultimate virtual-to-reality experience.

To take part, game players must race as either Tim Gajser, Evgeny Bobryshev or another Honda rider and finish in second place or higher at the Loket track, replicating Gajser’s result there last year in his World Championship-winning season. The player must then take an in-game screengrab and share it on social with @HondaProRacing on Facebook and @HondaRacingCRF on Twitter, using the hashtag #MXGP3.

The challenge closes on Monday 17 July and the winner will be chosen at random and announced on Tuesday 18 July, but with unlimited entries, players can enter as many times as they desire.

MXGP3 – The Official Motocross Videogame is available from 30th of May in digital and physical stores on PlayStation®4 and Xbox One®, the all-in-one games and entertainment system, and on Windows PC®/STEAM™. The game offers a dynamic, enjoyable gaming experience thanks to a series of innovative graphics, physics and audio introduced by the new Unreal® Engine 4 which takes game experience to a new level.

MXGP is the FIM Motocross World Championship; the leading global motocross race series taking in grands prix across Europe, America and Asia. Honda are the reigning Manufacturer and Rider World Champions with the works Team HRC and Tim Gajser, riding the Honda CRF450RW.

Terms and Conditions of Entry:
1) Players must tag in @Hondaproracing on Facebook and @HondaRacingCRF and #MXGP3 for their entry to be eligible
2) Players can enter as many times as they like but no entries will be considered after 17th July 2017 at 23h00 (CET)
3) Players will only be considered when playing as Tim Gajser, Evgeny Bobryshev or another Honda rider aboard the Honda CRF machine
4) One (1) winner will be chosen at random after the closing entry date and announced on Monday 18th July at 18h00 CET on HondaProRacing and @HondaRacingCRF
5) Winner will be mailed their clothing prize within one month of competition close.
6) Winner will be responsible for their own transport/accommodation if they wish to attend the MXGP race weekend
7) Per above, Winner will be given two entry and paddock passes for the selected MXGP weekend only for them and one (1) guest
8) Prize has no cash value and is not replaceable or changeable 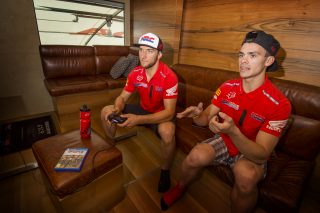 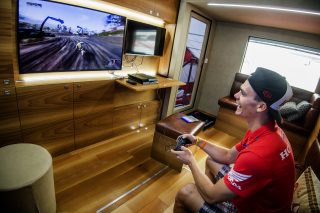 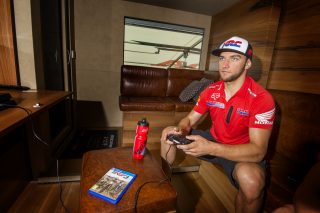 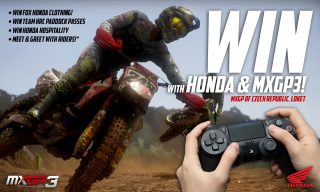 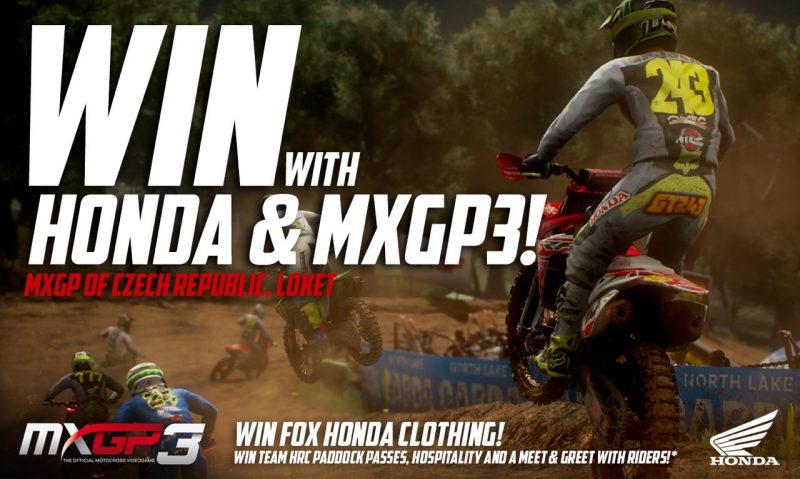