In the hot temperatures at Afyonkarahisar, Turkey, Team HRC’s Calvin Vlaanderen put himself in contention for another podium position tomorrow by finishing sixth in the qualification race.

With two successful practice sessions under his belt, Vlaanderen had third gate pick as he headed into the qualifier. Choosing the far left gate, he hoped to squeeze round the inside of everyone, but instead he was closed off and had to work his way through the field from around 10th place. As he has proved before at previous rounds, he is highly capable of making the necessary passes and had worked his way into fifth at the halfway stage of the moto. With the riders ahead having a bit of gap, he settled into a solid pace that was allowing him to conserve some energy in what promises to be two hot races tomorrow. Unfortunately with the one lap board out, a back-marker slammed on his brakes right in front of the Honda rider and with nowhere to go, Vlaanderen had an unavoidable collision which left him on the ground. He mounted as quickly as he could but lost one position in the process and now enters tomorrow with sixth gate pick.

Although passing is a lot easier at this facility, Vlaanderen still knows that in order to back up his victory in the second moto at the last round in Uddevalla, he must get out the gate well and that will be his target when he lines up for the races at 12:15 and 15:10 on Sunday 8th September.

The day was pretty good and I felt really comfortable on the track and on the bike. I was fourth in free practice and then third in timed practice so I knew I was riding well and that I should get a good result in the qualification race. Unfortunately I got a bad start and had to work my way through the field. I got up to fifth place and was riding easy, saving energy for tomorrow but then on the last lap a back-marker got in the way and I went into the back of him. I ended up sixth which isn’t too bad for the motos, where I’ll hopefully get better starts and try and return to the podium once again.

While the last lap was a bit disappointing due to the slower lappers out there, it was still a good ride by Calvin to come through the field in this qualification race and finish sixth. He made a lot of good passes and this is promising for tomorrow, where he should get some better starts and then with the speed he showed, challenge for the podium spots once again.

Qualifying Round 17   MX2 of Turkey Turkey 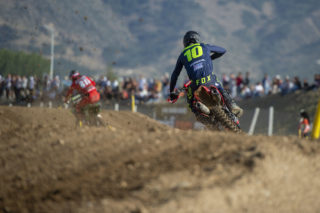 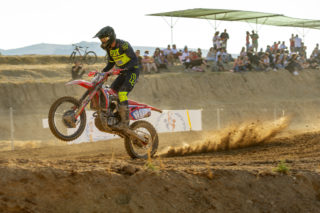 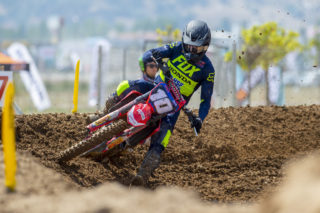 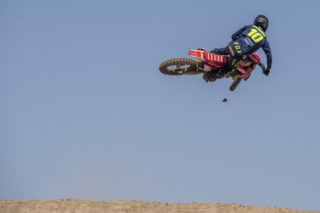