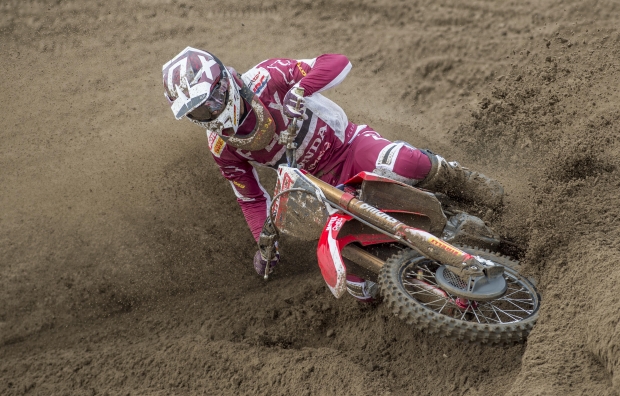 Heavy rain showers add to the challenging conditions today in Lommel as Gajser took third overall on his CRF450RW, in the qualifying race at the MXGP of Belgium.

The changeable weather saw torrential rain showers following bright spells of sunshine today, leaving the track sodden with some areas completely under water. Lommel is a track known for multiple line choices but the waterlogged state of some areas of the track only allowed ‘one line’ options, making it difficult to pass.

Gajser’s usually good start was hampered slightly by an initially poor gate choice. The Slovenian redeemed himself by making some early passes and despite a few small mistakes, he held his own in the slog and took a third-place finish.

Bobryshev has put in a lot of time this week training on tough sand tracks, so was feeling confident heading into this weekend. This morning during the warm up, Bobryshev unfortunately compressed his back which is causing him pain when he rides but he finished the race in 13th position and will attempt to race tomorrow.

Today’s qualifying was actually good today. I didn’t have the best start as it was quite muddy on the gate that I had chosen so I was like fifth or sixth off the start. I then made some passes as I found some good lines which was hard to do on the track conditions today. I am happy to take third in the sand race. The weather had made the track really hard to pass with one line in the chicanes. I think tomorrow the track is going to be really gnarly and really rough.

Today qualifying was really painful for me and I didn’t enjoy it. This morning in the warm-up I compressed my lower back and I have been in pain since. I have had some pain killers and been working with the physio but the pain has not really been relieved and it was just so tough to race, especially on landings. I just couldn’t get my speed, I rode until the end to make sure I finished. I am so frustrated especially after putting in a lot of hard work since Loket, I have been training hard to get back my fitness and condition and we have been working hard testing with the team, so to come to this is a nightmare for me. I guess that is racing life, you never really know what is going to happen but I must fight with that and try to see what I can in tomorrow’s race.

As we know there is a few guys who are very very good in sand conditions, especially in Lommel. We have normal sand tracks and then we have Lommel, it is one of a kind. For Tim he had a good start and pushed hard early on. He did make a few mistakes and wasn't as relaxed in his riding as he usually is but looked to be making headway. He ran with the 'sand fliers' for a bit, which is what he has to do. He has to hang on to them as their technique is based on purely riding in sand and his is probably more suited to a hard pack track. Unfortunately, Bobby tweaked his back a bit in first practice this morning and it is tightening up a bit on the bike. He is having physio to help him for tomorrow. He actually had a good start but he just cant hold onto the bike.

Qualifying Round 14   MXGP of Belgium Belgium 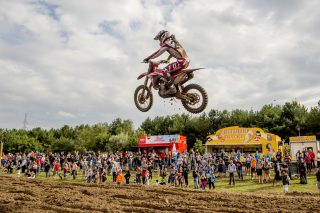 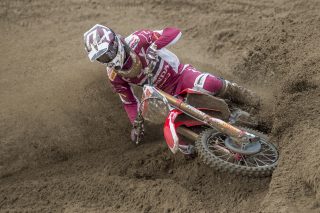 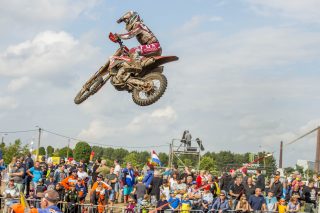 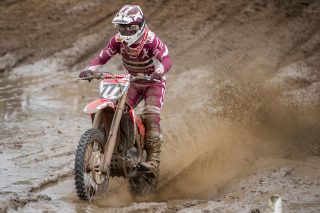